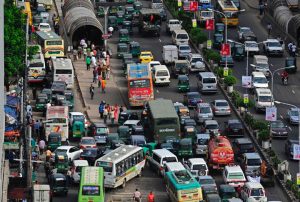 We were sitting in the back of an old Volkswagen Bug that had only three seats, dodging and weaving through traffic in the area around Chapultepec Park in Mexico City. My heart was in my throat and my left hand was in a death grip on my boyfriend’s right thigh.

He seemed calm and accepting of our hair-raising adventure – but he had lived in the city for over a decade and knew the traffic scene well. Meanwhile my continuous rounds of gasping in gulps of car exhaust, was making me lightheaded.

If you travel, there is no escaping the diversity of the traffic cultures of the world. Each of the major metropolitan areas I’ve visited seemed to have a different set of road rules from the last. Wishing at times I could employ a travelling crane service to lift me out of the vehicular chaos and confusion, at least I had the good sense – most of the time, not to be the one behind the wheel.

Beijing
Boasting more than 5 million registered cars in a city of 11.5 million residents, Beijing is not without its traffic hazards. You might recall reading about the 60-mile-long traffic jam that occurred there a couple of years ago?

People abandoned their cars after sitting for hours bumper to bumper with their fellow commuters and left them for days. You can count the air quality as a hazardous bi-product among the enormous number of traffic issues.

Mexico City
One of my favorite cities in the world comes with more than its fair share of crazy and confusing traffic rules. When I asked, who would be cited if an accident occurs, I was told whoever hit the other car. Simple as that.

If a car pulled out in front of you or cut you out of your lane, or came up on you too quickly – whatever the circumstances, if you hit them, you were cited. It didn’t matter whose fault it was, it was a problem for the person who hit the other car. Driving defensively is the name of the game in Mexico City.

Paris
Watching the traffic at the Arch de Triomphe circle around with horns honking and seemingly no sense of order is akin to Black Friday rush hour at an electronics outlet in the US. Lane markers are few and far between, as if anyone would give them attention anyway, and the right of way seems to belong to whoever gets it first.

The lack of parking is cited as one of the reasons for the driving mayhem as the competition is fierce and unrelenting if an open spot is spied. It’s best to take advantage of the city’s superb underground system and leave driving to the seasoned locals.

Toronto
A little closer to home is the infamous 18 lane highway 401. Not having the pleasure, myself, the stories are not for the faint of heart. There is one place you do not want to be at rush hour and that’s on the 401. If not positioned well to exit or enter, just forget about getting where you want to go without white knuckles.

The Canadians are known for their kind demeanor, but put any Canuck in the fray of 18 lanes of high speed traffic and they might start to resemble their cousins to the south. If visiting this exciting city, be sure to find alternative routes and better yet, don’t even get in a car at rush hour.

Mumbai
I couldn’t write an article on the most chaotic driving experiences in the world without mentioning India. Mumbai has long been considered possibly the most harum-scarum city to drive. Because of the dense concentration of people and cows, congestion is common. Yes, cows have the right away and you won’t hear people cursing them for blocking traffic.

Cows are considered sacred and a privilege to have in your path. That said, once free of any entanglements, the automobile horns never stop. The sound alone causes an unsettling that is ever pervasive in this city of nearly 12 million.

What’s been your experience when traveling? Do you have a harrowing tale to tell? Leave a comment below and tell us about it.